“Those who are motivated only by desire for the fruits of action are miserable, for they are constantly anxious about the results of what they do.”

From: The Bhagavad Gita

At 7:27 am one recent Saturday, my training partner and I milled amongst a crowd of eager runners, all waiting for the 7:30 signal to start our race. It was chilly and overcast, but the air seemed to shimmer with the exhilaration of 500 others that had chosen to participate that day.

We were familiar with the territory, having set our alarm for an ungodly hour to hit these trails every Thursday morning for the past four months. But 25 kilometres… neither of us had ever run that far.

The week leading up to the race, I was asked many times whether or not I was ready for it. My response was usually to laugh (does one ever feel prepared for such a thing?). So long as there was humour in the idea, it couldn’t be that bad.

Perhaps it was self-preservation, perhaps it was just plain denial… But I found myself referring to it as ‘another morning run in the woods.’  As long as I kept that frame of reference, there was no pressure, there were no expectations.

I was, however, interested in seeing how long this would take. Three and a half hours? Under three? I remember thinking that would be kind of nice.

We ran along familiar trails, through familiar patches of mud (albeit a little deeper and a lot more frequent that day), and up familiar hills. And then up more hills. And more. 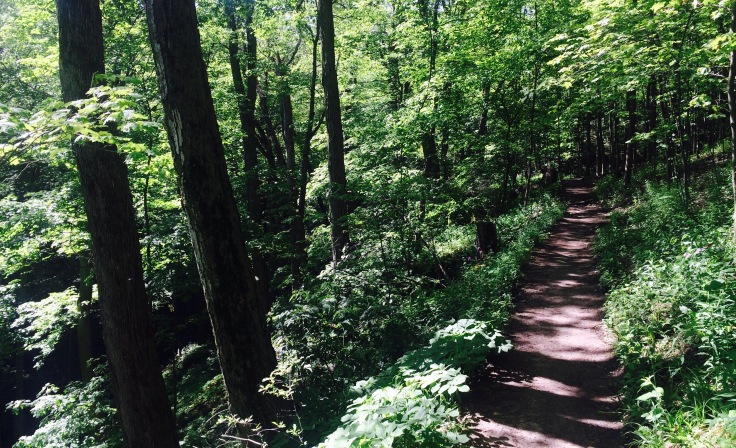 While we knew the terrain, there were two major differences: 1. We had no watch and 2. There were no kilometer markers. There was therefore no way to tell how long we were out there or how far we’d gone.

I wasn’t sure how that would go over, but there seemed to be a sort of freedom forcing myself to let go of space or time. There was no pressure of falling among a certain percentile; no anticipation of finishing within a certain timeframe.

Challenge yourself. Experience the experience. Run to run. These seemed to be the simple elements contributing to my idea of success.

24.8 kilometers later we hit an unforgiving uphill slog for the finish. The only things keeping me running were the cheers and relentless energy released from a crowd of spectators. My thanks to you, dear citizens.

I had run 25k when others were running 80, 100, 320. Yes, three hundred and twenty kilometers (experimenting with Google maps is guaranteed to make your head spin).

There were runners who had started two days prior to us, most of whom still had an entire day to go.

In the grand scheme of things, I was a mere needle on a century-old pine tree.

However, a bud is equally as stunning if we’re not anticipating the flower; a storm cloud is just as pleasant once we accept the beauty of the rain.

After crossing the line, the corner of my eye caught the time of a friend’s watch. It read 10:22 am.

My ranking didn’t matter; I had completed the course in under three hours. And I got to see my training partner cross the finish of her first 25k.

That right there was my equivalent of winning the Sulphur Springs jackpot.