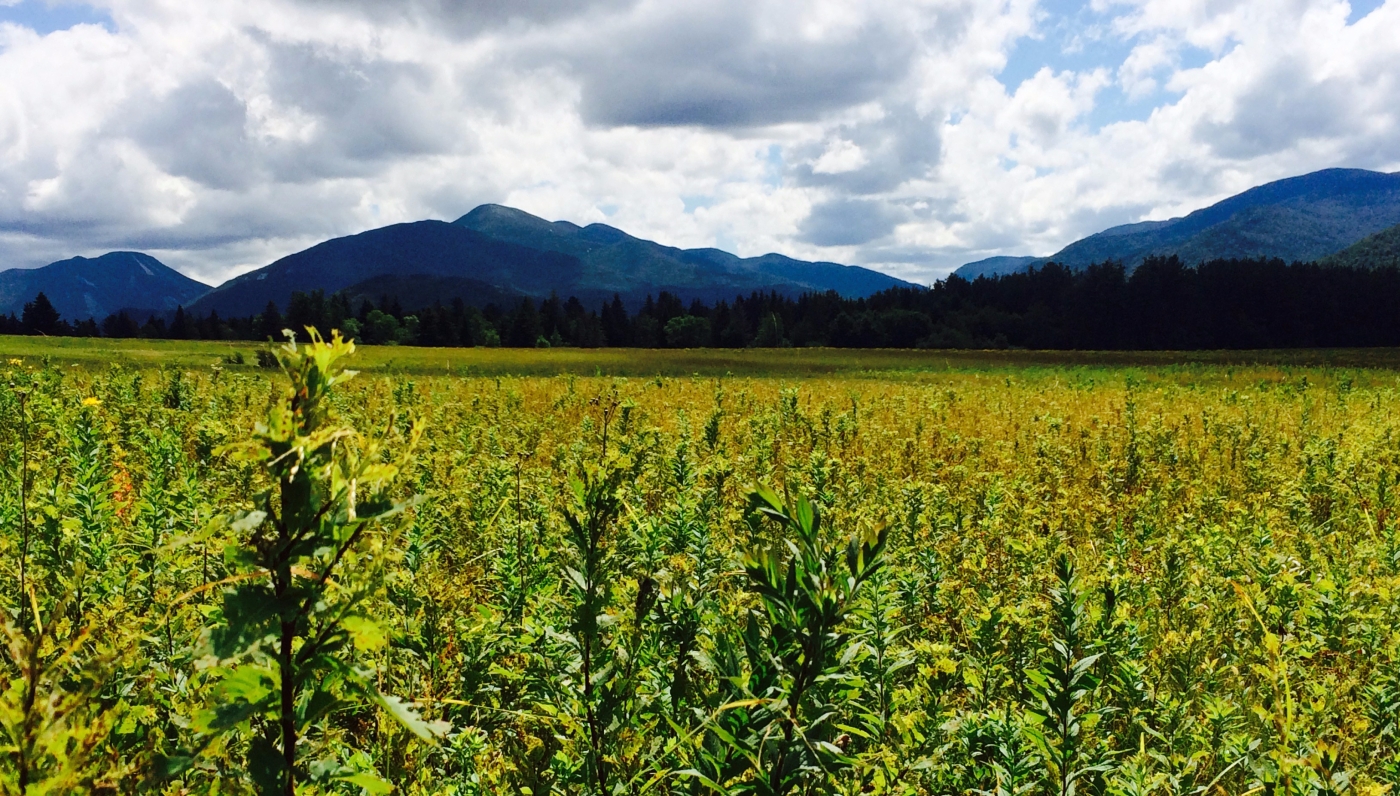 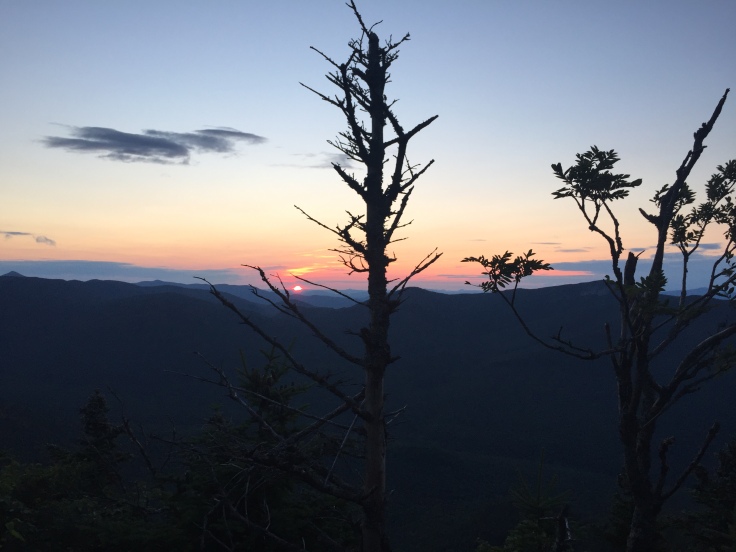 8:16pm: From the summit of Lower Wolf Jaw, I watched the glowing red sphere of evening sun sink behind the far away High Peaks of the Adirondacks. Since the sun had started its descent, my spirits had followed. To be out by dusk, I had timed our hike around a 17-hour finish, but it was clear we were taking much longer than anticipated. The issue at hand was that we were still at the top of a steep descent and now, our light was rapidly fading. We had left the most difficult of the traverse long behind, but with waning energy levels and screaming knees, I had finally reached the long awaited crux of our day.

11:15pm: In the dull beam of light that my headlamp softly offered in the darkness, I came upon the impression of a root laying to my left. The smooth, round protrusion of a small boulder rested in the centre of the path with another to its right. Just beyond was a six-inch drop. I approached slowly and came to a halt behind it. As I stood there, the complicated calculation to determine the least painful path began. What should have been an insignificant obstacle had become a monumental barrier. After a moment, I felt a gentle tap on my shoulder followed by an encouraging but forceful ‘go.’ I nodded silently. I started the movement forward; my right knee shouted back in resistance. Only three more kilometers.

We had come across the Great Range almost by happenstance, first hearing about it from an out-of-town climber over a birthday dinner. When I mentioned the traverse to my race partner, we agreed that the 42-kilometer-over-eight-peaks route aligned directly with our objectives for our first of two Adirondacks training weekends: Challenge. Suffering. And perseverance.

Then began a stream of research, and a stark (yet not completely unsurprising) wake-up call. Steep and scrambling terrain. No flats, only ups and downs. An estimated 17 hours. Exhaustion. But we were mentally committed, and neither of us seemed willing to give in or back down. 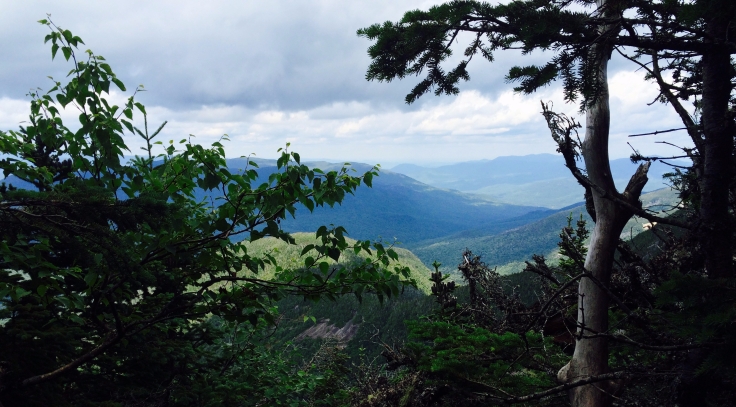 After only four hours of fitful sleep, the 3:30am alarm came much too early. It’s unwelcome tone, however, was a necessary evil; we started our hike promptly at 5:00am, and began our day with the long ascent up to Mt. Marcy, New York’s highest peak. Albeit a little groggy, the hike started off just as suggested by our new favourite shoe salesman (of trail runners, that is) with a slow and steady warm-up for what was to come.

We reached our first summit in strong winds, with zero visibility, and in my case, with a slight sinking of the stomach: we weren’t supposed to be there. We had decided to skip the Marcy peak (0.6 miles off-trail) to conserve time and ration energy. After missing our intersection, however, we had continued ascending, following my false sense of confidence.

After finding our way and descending onto our next peak, the trail got significantly more technical but the energy also seemed to shift. As the clouds lifted, what opened up before us was our very first vista of the High Peaks. Even though we were doing the hike for the training experience, the expansive views seemed to be a peace offering from the unforgiving Adirondack mountains. As the day progressed, those views were well received, bringing a renewed sense of energy. 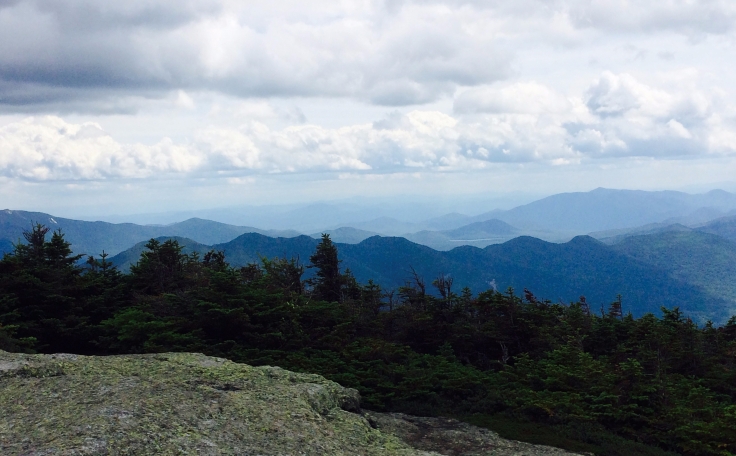 It was on the way up to Marcy that my left leg had begun its dull throb. I noted the pain but tried my best to push it from my mind; it was an infliction I’d dealt with for years.

What I didn’t anticipate, however, was that my right would join in and complain even more vociferously. The uneven terrain coupled with and endless cycle of ascents and descents aggravated the bursas in both inner knees, making an already challenging undertaking even more so.

On a hike to summit eight of the Adirondack mountains, once the pain set in there, unfortunately, was no reprieve.

It was in those moments of hardship and doubt when I reminded myself why we were there to begin with: to test our mental strength, to identify our strengths and weaknesses, and to push ourselves to our physical limits. Come ultramarathon day, we’d be equipped with the tools that the traverse had given us.

In summary, we were getting everything we asked for. 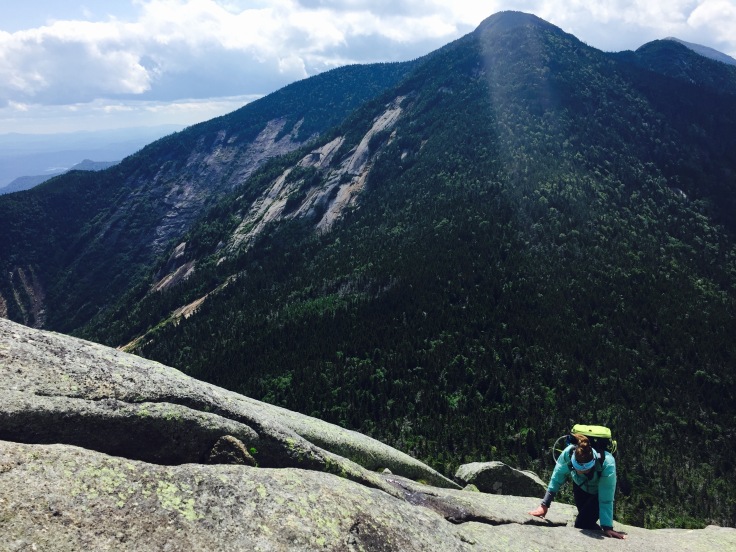 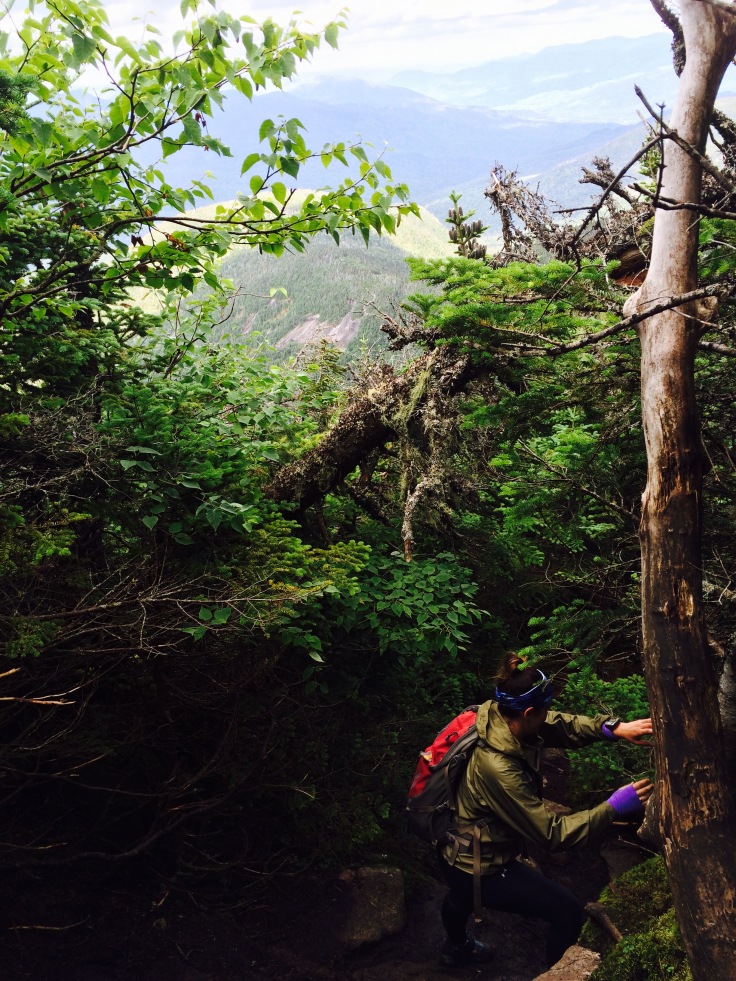 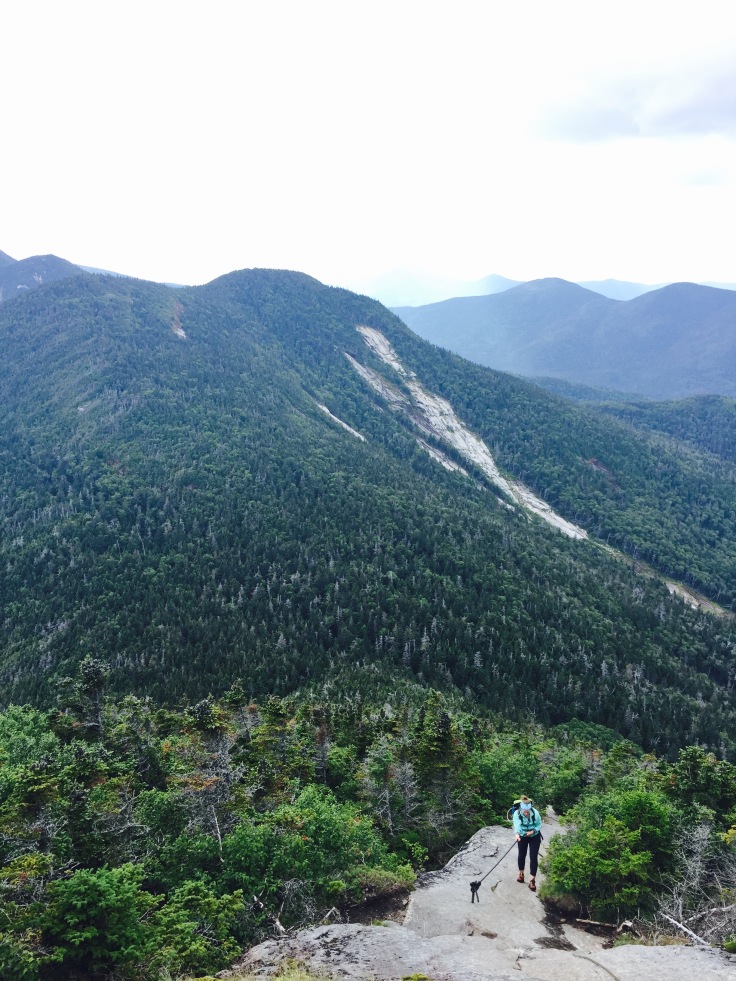 At 1:10am, 20 hours from when we initially embarked from the Adirondack Loj, we came out of the woods and into the dimly lit parking lot. I shuffled my way slowly onto the pavement, stood near our drop car and using my trekking poles for support, rested my head on the hands atop them.

All I thought about was my toothbrush and my tent.

The next morning, my partner in crime asked what the most memorable part of my day had been. My answer was immediate: the last three torturous kilometers and everything that came with it.

Shortly after, however, we went to pick up my car still waiting at our trail head. As we made the turn off of Hwy 73 and toward the Adirondack Loj, the range was all of a sudden standing before us. I exhaled and took a moment to absorb the sight: away in the distance, across a grassy yellow field, we could see Mt. Marcy and the route we had taken.

All of a sudden the trivialities we had experienced the day before shrank in comparison to those mountains.

Those last three hours have since become less and less memorable. It is, instead, the hours that have stitched themselves together into one great challenge; the boulders and rock faces that led to one big scramble; and the moments that have woven themselves into one unforgettable adventure.

Most of all, however, it is the small gestures from my race partner that helped to keep me going: her unwavering tenacity, her unrelenting spirit, and her silent yet consistently felt encouragement.  I embarked on this challenge with the perfect partner, and an even better friend.

Together, we earned the right to say we conquered the Great Range Traverse.

And can now reminisce through the rear view mirror. 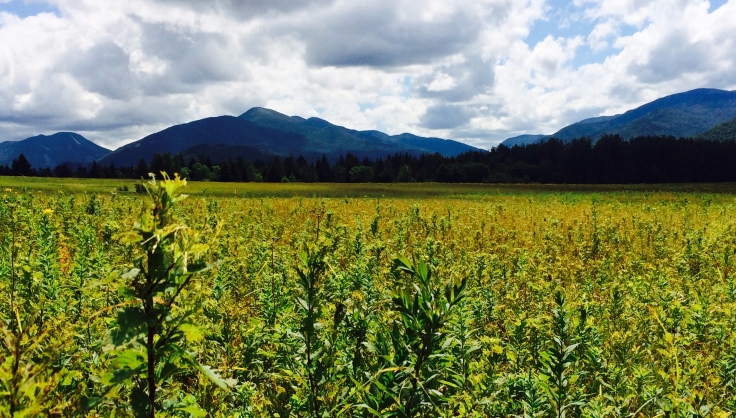 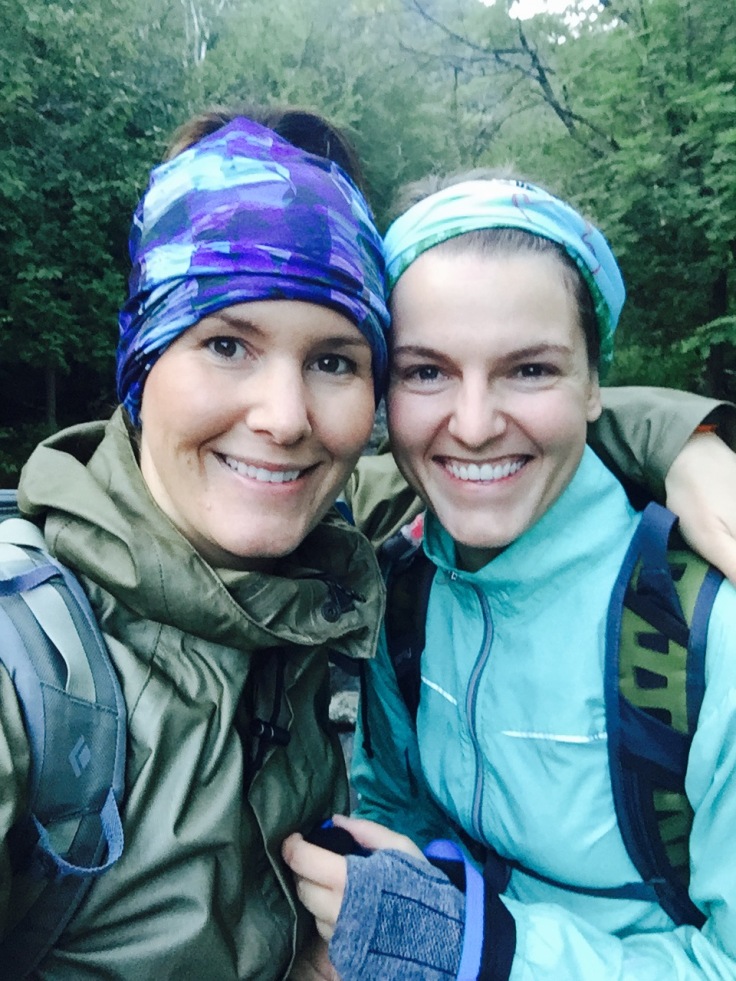 Photos provided by Layoma Gray.
Thinking about taking it on? For an in-depth and great review of the Great Range, click here to visit the blog of a fellow Hamilton trail runner.

4 thoughts on “In Training: The Great Range Traverse” 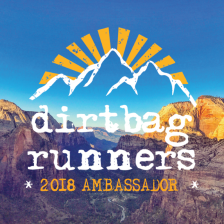